Last summer I researched hip-hop music performance in Tanzania and Albania. My thesis addressed numerous questions and issues, but my central focus dealt globalization, and whether or not our world was experiencing a more homogeneous performance of hip-hop, or if global and local practices were fusing together and producing a more heterogeneous hip-hop scene. I know that's a lot of wording, but basically in today's age many people feel that the world is just becoming the same place, that with advances in technology and more communication, it seems that societies are no longer as culturally distinct as they once were. I think about this pretty much everyday here in Albania and after my recent class field trip to get lunch, I felt moved to blog about it.

Albania, I believe, is the only European country without a McDonald's but who needs McDonald's when you've got Kolonat. While I have no idea what Kolonat stands for or who Kolonat is/was, this fast food restaurant has everything from the golden slants to the Big Mec. If you've noticed I changed my blogger picture to one with the Kolonat bag. Though the name is different it seemed at first that almost everything about this place reminded me of McDonald's, except for the fact that customers can order beer with a combo meal, which is not called a "combo" but rather a "menu." Upon first inspection though, one might assume that this place is just another effect of globalization and increasing homogeneity everywhere until you see something like this: 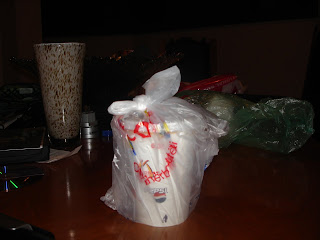 That's right the girl behind the counter wrapped my drink in a bag. I tried to stop her and tell her that I could just hold it but I was so intrigued that I just let her continue. Then I took a picture.

So I know that many of you want to know what the food tasted like...well unfortunately I wasn't brave enough to try the Big Mec so I just ate some pizza (another thing McDonald's in the U.S. doesn't have) and french fries. And of course my Sprite that was wrapped in a plastic bag!