back but soon heading out

Hey y'all, took a break for a while. Did some traveling, some chilling out and been having those last few coffees before heading out on Monday, at which point I'm back in the States. The summer's gone by really fast and I can't say that I'm exactly ready to begin classes again in the fall, but I can say that I'm excited about getting back to Austin and eating queso.
Anyhow, I've decided to post a few things since I've been gone for a while - these are just some things that I've been thinking about, starting with hugs. In my experience Albanians do not really hug people as much as they kiss them. Kissing here is very important, and you must know who you're supposed to greet with a kiss (versus a handshake), when it's time to give a 2-cheek kiss, versus a 4-cheek kiss, or even a 3-cheek kiss if you're in Kosovë (warning, could be confusing if you're expected the 4th and the other person isn't!). There have even been times when I watched someone kiss another person 8 or so times on the side of the road as we waited for her to board the furgon. I thought that since they kissed 8 times she must be headed out for a long long journey but I learned that she was just going away for the week! One time a woman that I didn't know just came up to me in the rruge, greeted me with a good morning, and kissed me twice as though we had been old friends - that was just her way of saying hi.
Anyhow, I digress, the point is you must learn the rules of kissing once you arrive. Well I've always thought that Americans, well let me say Mississippians, are really big on hugs. Handshakes too, but hugs, I mean we give long, solid hugs but rarely outside of family members do people exchange kisses. Going back to Albanians, some people hug when they give kisses but for the most part, hugs are not as important - that is until you run across those few people who like to give the kind of embrace that puts you in a choke hold. I wrote all of that just to share this picture below - just trust me, this man had a grip! 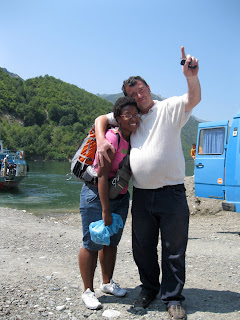